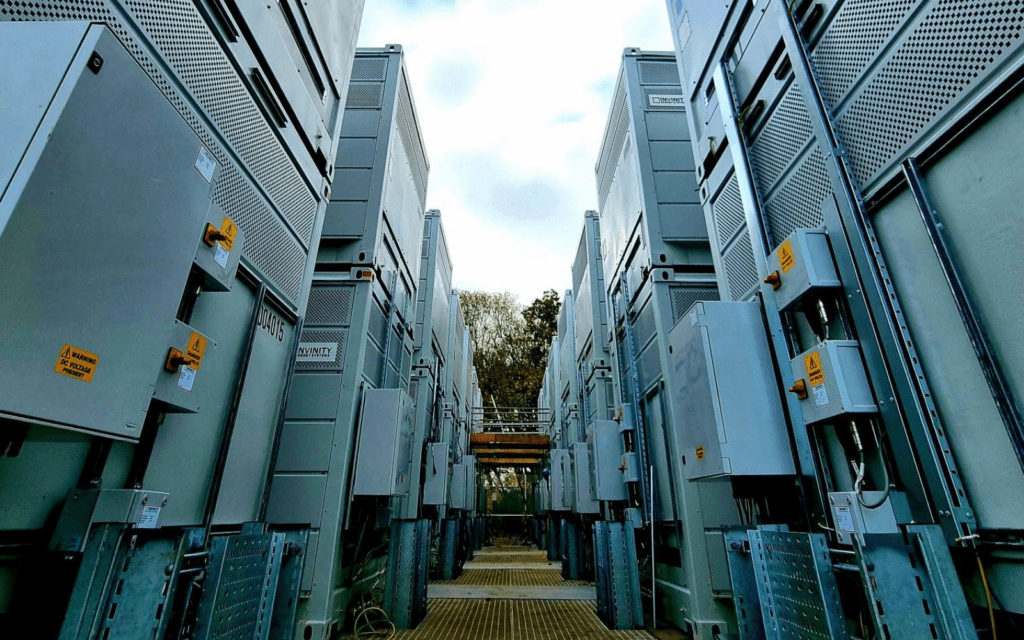 Invinity VRFB units at the Energy Superhub project in England, where the technology is paired with a 50MW lithium-ion BESS in a hybrid configuration. Image: Invinity Energy Systems.

While projects can be done without them, being certified to standards like UL1973 and NFPA855 makes the “mind numbing” process of going through site-level permitting, commissioning and other development stages much shorter, Invinity chief commercial officer (CCO) Matt Harper said.

Harper spoke to Energy-Storage.news at last week’s RE+ 2022 industry event in California, a few days after vanadium redox flow battery (VRFB) provider Invinity announced that its third-generation battery modules, VS3, got UL1973 certification.

As such, it has become the major standard for battery storage system safety, alongside the US National Fire Protection Association (NFPA) standard NFPA855, which covers safe installation practices, UL9540, UL’s installation safety guidelines and UL9540A, the famous test to induce thermal runaway and assess likelihood of fire spreading, or propagating, from one cell to others.

Unlike lithium-ion batteries which store energy inside the cells, VRFBs store energy in tanks of liquid electrolyte separately to the cell stack. They do not go into thermal runaway, which means it might be assumed going through safety tests would be relatively easy for a flow battery provider to pass through.

“They are fairly easy to get through, but it doesn’t mean that the tests themselves don’t have this massive amount of stuff wrapped around them,” Harper said.

While UL9540 and specifically UL9540A focus directly on fire safety, UL1973 is a “much broader” standard, and required the Invinity team to spend a lot of time preparing for a test that examines “every aspect of battery safety”.

In some ways, therefore the company benefitted from its tech having certain key differences to lithium-ion, but also meant various aspects of the technology needed to be explained to testers less familiar with the flow battery technology.

In other words, a lot of the work behind getting the certification “is less standard than what gets done by a lot of the other battery companies out there,” Harper said.

“But it allows us to really sort of emphasise some of the unique advantages of the technology, especially around fire safety.”

Having the right certifications is important for bankability, making it much easier for developers to get project financing and therefore playing a vital role in their decision-making process on selecting technologies and technology providers.

According to Matt Harper though, certifications matter from end-to-end throughout the whole development process.

“Even before you get to questions of bankability, if you’re trying to install a battery in the grid that doesn’t have those kinds of certifications, you could do it and we’ve done it, but it’s just a mind-numbing process. It takes a lot longer to go through the site-level permitting, go through the commissioning process, to get everything signed off.

“Whereas if you’ve got, UL1973 or UL9540 certification, then the local electrical inspector is going to look at and say, ‘Ok, you’ve met that, you’ve met the national standard, just go ahead’.”

To think about the broader question of bankability, providers need to be able to show customers their technology will do what it’s claimed it can do over the lifetime of the project. For companies working in a less mature technology like VRFBs, as opposed to lithium-ion batteries, there is no “magic bullet” that will make a system bankable.

Battery storage system integrator and technology provider Fluence, which does typically work with lithium-ion battery chemistries, recently announced results of its UL9540A burn tests, as reported by Energy-Storage.news a few days ago.

Also speaking to the site at RE+ last week, Fluence’s VP of growth and head of commercial Kiran Kumaraswamy also pointed out the different ways in which testing, standards and certification matter.

Being able to point to verified test results helps build confidence for the industry around “many aspects of the technology,” Kumaraswamy said.

“From a financing perspective, from an insurance perspective, from so many dimensions, it proves conclusively what the technology can do for you, in a safe manner and I would also say in a highly differentiated manner against competition and deliver the benefits for the customers.”

Recent updates have been made to UL1973. This week, we will be learning about those and holding a discussion about various aspects of the standard from experts at CSA Group, which carries out tests and helps industry stakeholders to understand the process.